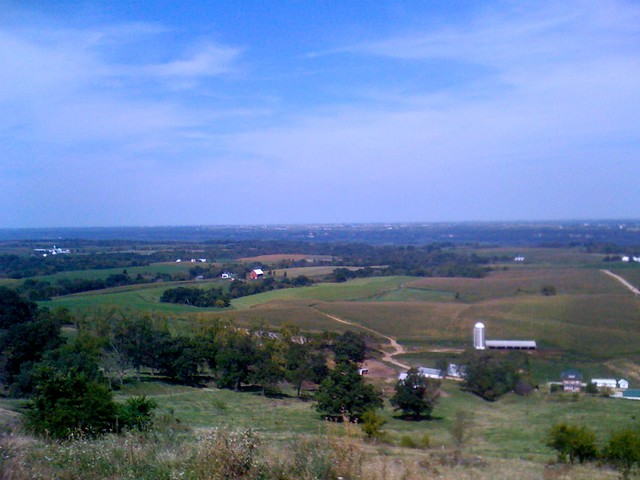 After doing the beautiful drive between McGregor and Guttenberg a couple of times these days, I decided it might be time to human-power through the land for a change, so today I started from Guttenberg on the bike instead of in the kayak. The river road definitely goes through hills and dales up and down the bluffs of eastern Iowa, and it is absolutely gorgeous countryside, of a lush expansiveness my iPhone definitely cannot photograph. And my audio recorder can’t capture, either. There is long-distance hearing as well as seeing; something you can only experience when the close-up sounds subside, a rare experience for an urbanite like me, and then you realize you can hear for miles and miles and miles. For real.

When I got to the high point in Balltown, IA, there was a park bench at the overlook with the following message etched in the stone: “I’ve enjoyed this view my whole life. Why not share it with everyone!!” Can you imagine what a great guy Ferdie Klein must have been, not just to help endow the overlook, but to give us the joy and fearlessness embodied in those two exclamation points? He is right here with us!!

I never got back on the bike after Balltown yesterday, because there was a big German restaurant that has been there since 1852 or something, so I texted Mac and he came up from Dubuque (“not as glamorous as you would imagine,” Becky had said, dryly) and we had fried cheese curds(!) and huge hamburgers and more wheat beer (it is everywhere), and then Mac drove us to the Holy Ghost Grotto over in Wisconsin, which Nick had recommended (Nick, you are still with us on this journey, that’s for sure!), and I am so very glad we went there. An artwork on the scale of Watts Towers in Los Angeles or the Beer Can House in Houston, but with the additional overlay of an ardent and exuberant Catholicism, it was built in the 1920’s by the priest of the local church over a period of five years without any preplanning at all. It’s the details that delight me: I imagine him gathering all these materials and then waking up each morning to say “Shall I make a stone rose today; or maybe it’s time for the grapes. No, the tree of life, that’s it!” And did he talk about his work in his weekly sermons? I hope so: it would have been great to hear what he had to say about his project while he was in the midst of making it.

Today I paddled to the Aitkin Campground from about 18 river miles north of town. Aitkin County is mostly farmland, and it was interesting, to say the least, to hear cattle lowing for a good 45 minutes before I rounded a bend and saw a good-sized herd hanging out by the river. At another point, I saw corn growing right up to the edge of the river, replacing the cattails and reeds that have lined the banks up to now. The huge distance between agriculture and nature has never been clearer to me, and I understand in a new way how strange it must have been for the Ojibwe to have had their lands divided up into 160 acre parcels, which were then bestowed on them with the idea that each nuclear family group would become farmers.

I managed to take a photograph of the cows, but I didn’t get out my camera for the corn, and I’m sorry for that. It raises a funny issue that Richard and Mac and I have been talking about since almost the beginning of our travels. It’s very difficult to overcome the urge to take pictures only of picturesque or iconic sights: the growing corn doesn’t make a particularly compelling photograph, so I’m too lazy to take my iPhone out of its waterproof container. But since I am interested in trying to communicate the river as it is, not as I would like it to be, I feel like I am failing in an important way if I neglect to photograph the corn.

I keep thinking about Mary Ellen Carroll‘s artwork where she strapped a camera to her back and walked down Broadway from the top to the bottom of Manhattan, snapping a photograph at each intersection. Because she didn’t frame the photographs, choose any particular feature, but just clicked a remote, the photographs are a random sample of Broadway as it radically changes character on its journey through Manhattan. It’s a fascinating trove of images of the city at a particular time (mid-90’s if I remember properly), and the ”bad“ photographs are precisely what makes it such a compelling piece of work.

I started out doing audio recordings inspired by this idea of random samples, but I found it less interesting than I had imagined. As I think about it, though, perhaps I should be patient and try doing at least one recording each day and see what unfolds over the whole journey. It isn’t about emulating the elegance and beauty of Annea Lockwood’s sound maps of the Hudson River

: it’s perhaps a more Cage-ian idea, one that requires me to embrace the process and let go of the results, as they say…

I did take some other photographs, and you can see what I mean about capturing the picturesque and the iconic: a nice farmhouse with trees, and one I really like of a living tree and a dead tree intertwined. I think very often these days about how the natural world is half-living and half-dead all the time. One set of stuff is fallen and decayed and another set of stuff is growing out of that decay, and the living is completely dependent on the dead. The muddy, organic river intensifies that sense of death-in-life, I think. I don’t really like the river water, it’s murky and scary even here at the early part of the river; and while it’s of course a river of life, the rich and varied wildlife are proof of that, it also seems to carry a daunting amount of death in it.

And of course, we are in late high summer, the trees are fully deep green, no new life is left in them, they are at the fullest flower of their maturity.