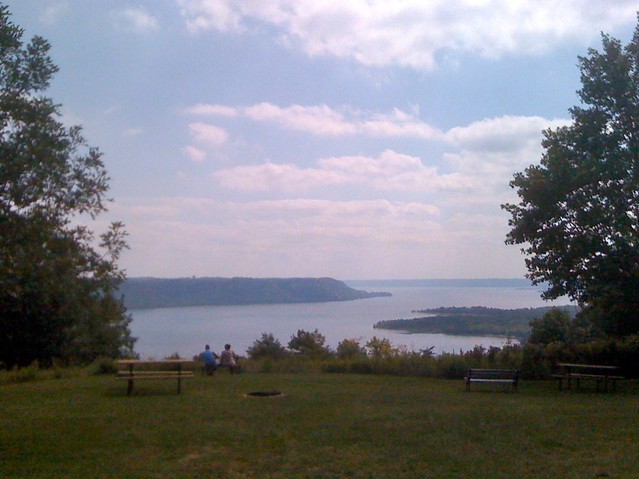 I was on driver/campsite duty today, so after taking Mac down to put in for his day of paddling, I came back to St. Croix Bluffs to see off dear Heather, who is heading back to NYC. I showed Mary Kay how to pack the camp into the car, and then drove her down to Hastings and dropped off her and the bike so she could set off on a biking adventure. I felt a bit like a suburban mom taking all the kids to their various soccer matches and dance classes. Once everyone was launched, I headed over to Frontenac State Park on a back road that reminds me a bit of Birch Hill Road, my road in Vermont. It climbs up to a beautiful high bluff that has the most amazing view of the river (well, it’s officially Lake Pepin right now) we’ve had. And the campsite is set up so that there is a whole segregated wing just for tent campers, yay!, which was almost totally empty. The RVs have their own wings, and those were pretty full of hulking behemoths set up cheek by jowl.

In the evening, I brought Mac and Mary Kay up to the overlook, and we came upon a very kind couple there who we chatted with for a while. They are from the Twin Cities, and were finishing up a vacation that took them around the Upper Midwest, and as we were talking I suddenly had this realization that I need to let go of my reflexive prejudice against RVs and the people who drive them. (The only RVers I know are my great-aunt and uncle Rete and Jan, whom I love vastly, but that hasn’t altered my prejudice against RVs.) But suddenly it was completely clear to me that these people we were talking to love love love their experience of wandering this country just as much as I do, and perhaps they wouldn’t do it if they had to sleep in a tent. Perhaps they really can’t sleep in a tent, for whatever reason. I remember Keith Butler, the man we met at Wanagan’s Landing the first night of this journey, looking very specifically at me, the oldest of our group that night, and saying “Keep camping out and sleeping in a tent, or you’ll lose the ability to do it.” He told me that he and his wife, who I imagine must be in their 70s, still tent camp every summer. And I suppose it is a skill, or at least a habit, although I can’t really imagine losing it!

Anyway, I’m pledging here not to be snotty about RVs anymore. It’s my step towards openmindedness about Red State culture: so now can I have affordable health insurance in return? Please?!