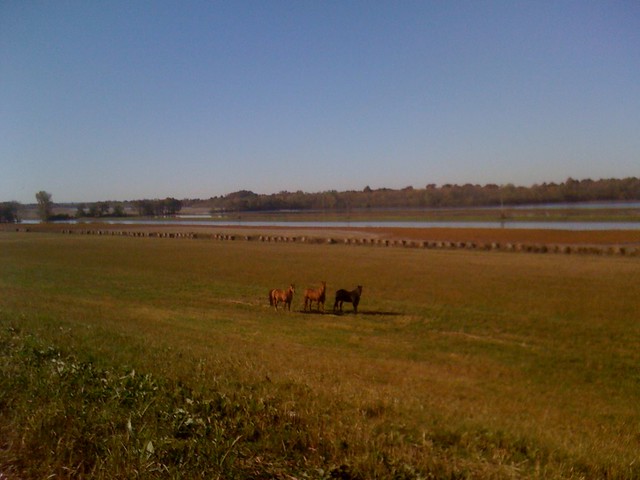 Leaving the Cities, and the kindness of Philip and Preston, is sort of slow going this morning. On one hand, I’m really eager to be back to the river and small-town America and the rhythm of life we have created on this journey; on the other hand, I could easily spend another week here visiting friends and colleagues, mulling over the implications of the trip so far, and maybe even making some music, now that Mary Kay has brought my DP install disk, so that I can get it running on my replacement computer.

One thing Philip said seemingly almost offhandedly the other day is really helping me think through this whole undertaking. He mentioned something about how the point of the journey is for me to have my own take on the river: not so much to gather other people’s takes as an (ethno)musicologist might. I’ve been feeling sort of guilty and inadequate that I have little or no interest in going to hear music at the State Fair, for example; I would much rather look at the hundreds of species of rabbits, listen to the auctioneers sell off cows, and study the crop art (did you catch the crop art iPhone I posted the other day?!) Philip and Preston seemed to immediately understand this, and even though they certainly know about lots of interesting music in Minnesota, including their own, they didn’t push me to explore that now. The fact is, other than at church each Sunday, I have heard no live music at all on this trip. Unless you count birds and wind and train whistles and industrial sounds. Which I definitely do.

I feel like I am emptying myself of other people’s music. And it’s a bit scary, actually, since lots of the music I have written is in one way or another a response to music that already exists. I’m not sure what music I will be moved to write. I’m (mostly) okay with this emptying even though it creates a certain amount of mild anxiety in me. It’s sort of like a large-scale version of the emptying that comes before any new piece. But Philip’s comment somehow gave me permission to be squarely in this state, not to try to escape it, and I am really grateful to him for saying it.

It’s Mac’s paddling day today, and because we have a second kayak, Heather and Mary Kay can each get a half-day of paddling with his company, which seems like an excellent way to get them started on the river. Heather started out with Mac in the morning, so Mary Kay and I wandered around Mendota a bit, which was a curious experience. Mendota barely exists now, but it was a town long before St. Paul or Minneapolis came into being, and there are a few exquisitely maintained stone structures: St. Peter’s Church, Governor Sibley’s house, etc. right near where the Minnesota RIver joins the Mississippi, not far from Fort Snelling. They are made of the limestone that creates the bluffs we have just now started seeing, and there’s something great about how local these structures are. Makes me definitely want to build my Vermont house out of stone and wood gathered from my own land.

The trade-off point for Heather and Mary Kay was a boat launch just down from the US 494 bridge: maybe one of the biggest bridges we’ve seen yet over the Mississippi, and it’s under huge construction to double the lanes. An old man was sitting on a bench there: Ken has been coming out to watch the construction every day for months now. He had worked for years in the stockyards of South St. Paul; born in 1920, he grew up here the youngest of eleven children of parents and grandparents who grew up here, and most of his four children live nearby as well. I got to thinking about how some families have one person who did the big move of emigrating and then everyone settles in the new place for generations to come; while other folks seem to have immigration in their blood and they themselves and many of their offspring end up moving repeatedly all over the country or the world. I feel like I have both sides in me: my father was a wanderer by nature (or was it an adaptation to his circumstances?), and my mother always claimed she would have been happy to live in Farmington or Plymouth (Michigan) her whole life. But of course she didn’t, and I don’t know that she could have, despite all her voiced longing for that alternate settled life she never lived.

this song showed up in my iPod rotation this morning, and I feel I should share it with you:

Mac posted about cows here, which made me laugh til I cried…

and Richard is posting great stuff here, the beginnings of fruits from his research at the Minnesota Historical Society.