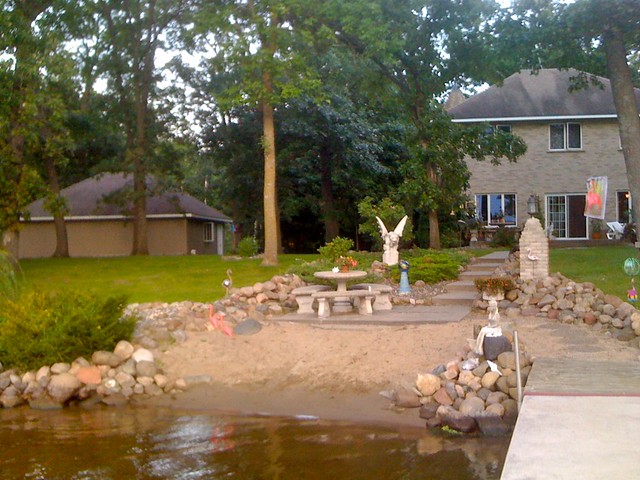 It was my kayaking day today, and I started out happily from right below Blanchard Dam. Mac and I looked for some cross rocks before I started out. My cousin Meg would have found a bunch — she’s an expert at finding Petosky stones on Lake Michigan — but Mac and I didn’t succeed in finding even one.

The river was rougher than it has been: it’s wide enough here that you get pretty serious swells, which my little red sportscar of a kayak handles just fine. But as the day went on, the wind got stronger and stronger, and it was completely, fiercely, against me (coming from the south), and this stretch of the river doesn’t meander much, so once the wind is against you, it stays against you. And then, because of the upcoming Sartell Dam, the current subsides to basically zero, and here I am on this damn lake of a river, with the wind so strong I am paddling against whitecaps, using all my strength basically to avoid being blown upstream again. And I’m passing houses of a size and grandeur that, I’m sorry, just seem ridiculous to me: what family could possibly need a summer house of 12,000 square feet or something?!? McMansion summer houses with six boats moored out front: jet skis, pontoon boats, etc. etc.

So there I am madly paddling away just to stay still, and this very cool little 70’s era powerboat pulls up, and the guy says, “You’re paddling in the wrong direction today!” I agreed, and he told me his house was about a mile and a half down on the left, and that the place I had planned to meet up with Mac and pull out was still another six miles beyond that, and that I was welcome to stop at his place for at least a bathroom break or something.

After he left, the river did do one meander, which was enough for me to stop and text Mac about why I was so late, but when the river turned again I was back in the brunt of this insane wind, so when I got to Gary and Debbie’s place, pictured above (check the flamingos!), and Gary came out to usher me in, I decided I really had had enough, and pulled in. I called Mac to come get me, and when he arrived, Gary and Debbie invited us to stay for dinner, which we gratefully accepted, and Debbie showed us her orchid collection of something like 200 plants (I see this in your future, Yvan!), and introduced us to their parrot, Etta (for Etta James), and fed us an excellent meal, and were altogether generous and lovely folks. They live up here full time, Gary works at the Sartell Mill, and Debbie is a serious runner, like 70-miles-a-week serious(!) and they have two grown kids who work in the Twin Cities, the girl as a zookeeper, how cool is that?! Gary built their house himself, (nowhere near 12K sqft) so we talked a bit about housebuilding, too. And they told us about the upcoming Minnesota State Fair, which we may have to go to. I’ve never actually been to a state fair, so maybe it’s part of my education.

Anyway, I’m writing this the next day, and I’m STILL pretty fried. It’s a great lesson that even though I’m getting stronger and more experienced at this kayaking biz, it will still kick my ass when it feels like it!