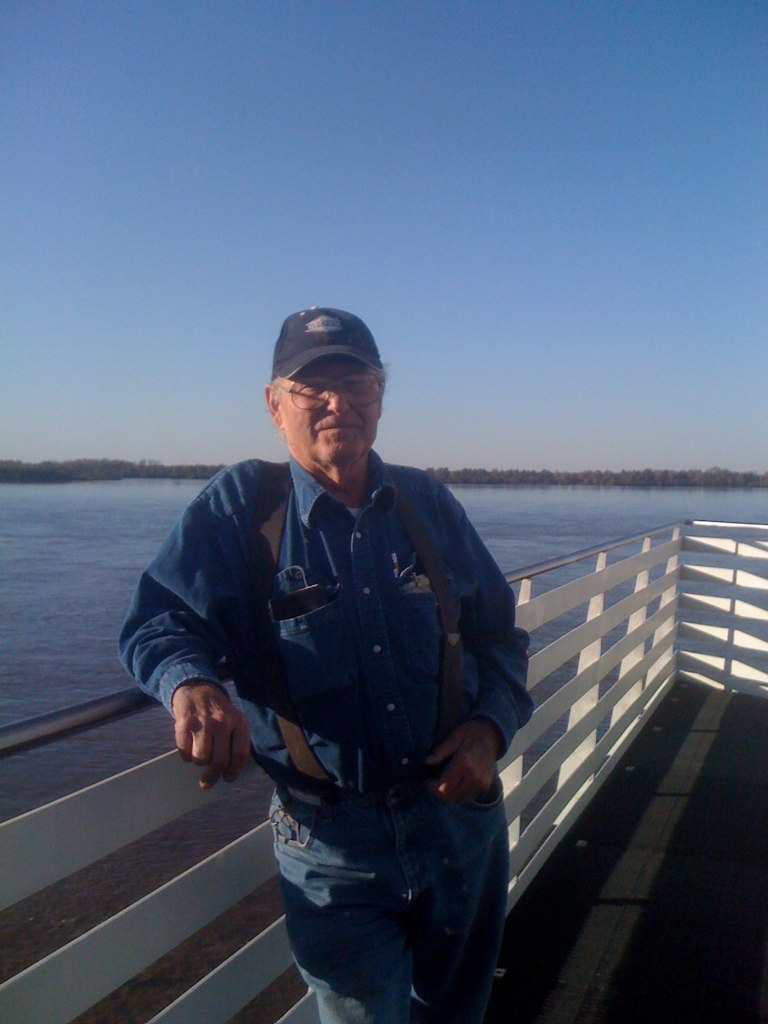 This morning I finally left dear David and Shawna, who have been so so wonderful to hang out with, and tearfully bid adieu to my fuzzy bedmate Fred, and started heading south out of Memphis on the east side of the river this time. At Tunica I saw signs for a riverpark, so I turned off and drove over to the river, where this multi-million-dollar facility sits right on the river’s edge. Clearly, casino revenues are allowing all sorts of things to flourish in Tunica! But before I could even get to the door of the museum, a gentleman on a golf cart rode up and offered to buy me lunch and show me around. I’m definitely beginning to understand what is meant by Southern hospitality! Craig, who was the Construction Supervisor of the park but is now its unofficial mayor, took me over to the Hollywood Cafe, a great place nearby, (mentioned in the song Walking in Memphis,) where he showed me pictures of his carpentry and woodworking, and told me many excellent stories about Tunica and environs. Then he took me back to the grounds of the park, where they have built miles of wooden bridges for walking through the bottomlands, although the water is high enough now that portions of the bridges are impassable. It’s a wonderful place, one of the few I’ve come across that makes it easy to explore the river side of the levees from the land. Other than boat launches, there isn’t much chance of that.

Here is one of Craig’s stories, just to give you an idea of how I might have spent the whole afternoon with him: he and two employees were building one of the bridges when a machine broke. Craig asked his workers to take a break and go away for a while, because it made him nervous to be watched while he was trying to fix something. They left, but after a moment he wondered if they’d snuck back and were spying on him, because he felt eyes on him. He looked up and there was a black panther, just along the other side of the bridge. I keep picturing Craig looking up in irritation, about to upbraid his employees for coming back too soon, and locking eyes with a black panther instead. I bet he was really grateful when his workers got back and the panther melted off into the woods.

The museum itself is really beautifully done; it turns out that John Barry, the author of Rising Tide: The Great Mississippi Flood of 1927 and How It Changed America

, one of the books that inspired this journey of mine, was an adviser for the exhibits. Along with a simulated diving bell, and many cool videos and photographs, and some fine Native American artifacts, there is also an aquarium, with some river creatures even stranger and more mythological-looking than I had known existed. Alligator gar, anyone? If that doesn’t creep you out a little bit, nothing will!