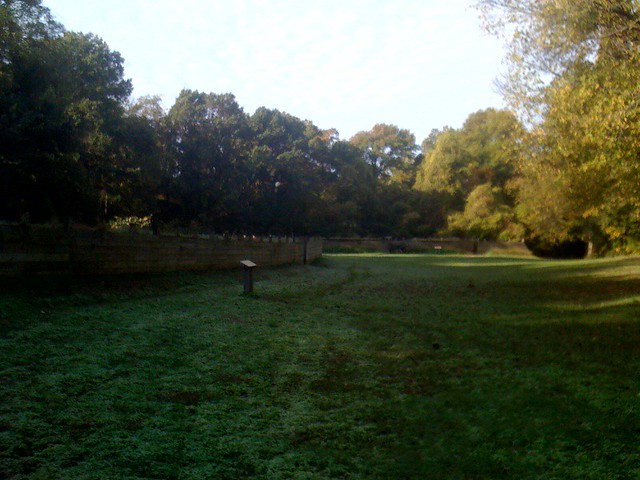 Even though it was still rainy, we headed back up to Tiptonville Friday and I did a good long ride, mostly through open farmland, ending up pretty sodden and very grateful for the excellent shower at Fort Pillow State Park, where we stayed for two nights. Mary did the biking Saturday, and I spent the day driving around and checking out various towns (Ripley, Henning, Covington) looking for an open library or internet cafe, pretty much fruitlessly. These are the closest towns to the river around here, but they are all a good ten to twenty miles away from it, I guess because floods and earthquakes make it too unstable to site a town any closer. Towns that are right on the river can only add sprawl on one side, so if you keep your orientation to the river, you can travel for weeks without having to encounter McDonalds and Taco Bell. But these towns, even though they have an old town center that feels specific and real, are surrounded by Walmart and Pizza Hut sprawl in every direction, enough to make you weep.

Sunday morning, we explored Fort Pillow State Park, taking a hike up to the old fort, which has been reconstructed, and spending some time in the interpretive center. The battle here is notable because the Confederates, led by Nathan Bedford Forrest, massacred Union soldiers after they surrendered, because Forrest did not want to treat integrated troops according to the rules of war.

Here is a statement by the Confederate Secretary of War at the time: “I doubt, however, whether the exchange of negroes at all for our soldiers would be tolerated. As to the white officers serving with negro troops, we ought never to be inconvenienced with such prisoners.”

After the war, Forrest reportedly became the first Grand Master of the Ku Klux Klan. And all around these parts you can find memorials to him: Forrest Park in Memphis, Forrest State Park near Camden, Forrest City in Arkansas, Forrest County in Mississippi, and various statues and obelisks and markers sprinkled in government buildings and public places all over the south.

Call me an insensitive northerner if you like, but I really need help understanding how it is okay to have kids going to Nathan Bedford Forrest High School. Do we have Lieutenant Calley High School? How about a Specialist Charles Graner Park?