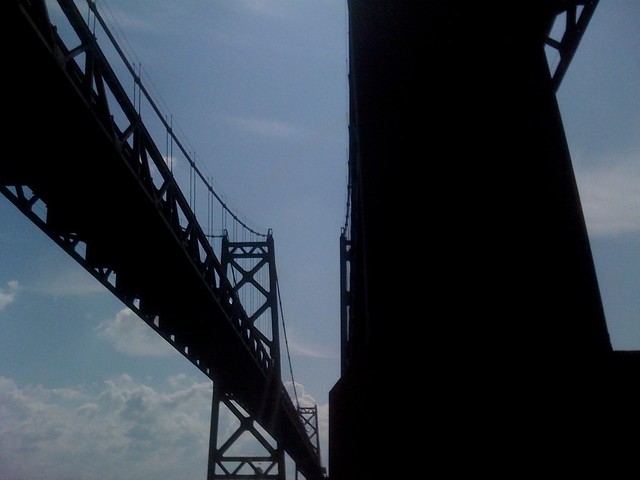 I put in this morning at the boat launch in Port Byron and paddled down to Bettendorf, passing under the I-80 bridge, which I have driven on more than a couple of cross-country trips without hardly even registering the Mississippi. It’s interesting how the small river towns make the river the centerpiece of the community, but the larger cities almost ignore the river, turning their backs on it as if almost ashamed of the very reason for their existence. You can see that the Quad Cities are working at rebuilding their waterfronts, but I’m sorry to say that most of it still feels pretty vacant, sort of like the urban renewal projects of the 20th century, rather than authentically organic vitality.

I pulled out just after the I-74 bridge pictured above, and Lori and I headed over to the one non-Starbuck’s cafe we could find (thanks, Jane!!) and then to Arsenal Island, where I bought my very own set of sexy river maps that will cover the rest of the trip. (There is such a thing as map porn, and the Army Corps does a pretty good job of scratching that particular itch.) We drove around looking for the museum to no avail: we were pretty tired, but there’s also a strange secretive lack of information on this Army-run island: maybe better signage to the museum would incite terrorists, I don’t know. But we had no trouble finding the cemeteries: rows upon endless rows of white headstones, a segregated cemetery for the confederate soldiers who died in captivity here (I gather there was a sort of concentration camp, a northern Andersonville, here, during the Civil War) and then the national cemetery, where we were alone except for two young women and a small child who were gathered at the freshest graves. In a moment I looked back, and one of the women had wrapped herself around a headstone, and I couldn’t help but picture that Iowa or Illinois boy, just about Mac’s age, the fresh young love of this young woman’s life, the father of this toddler, blown to pieces by an IED, bleeding to death in the dust of Iraq.