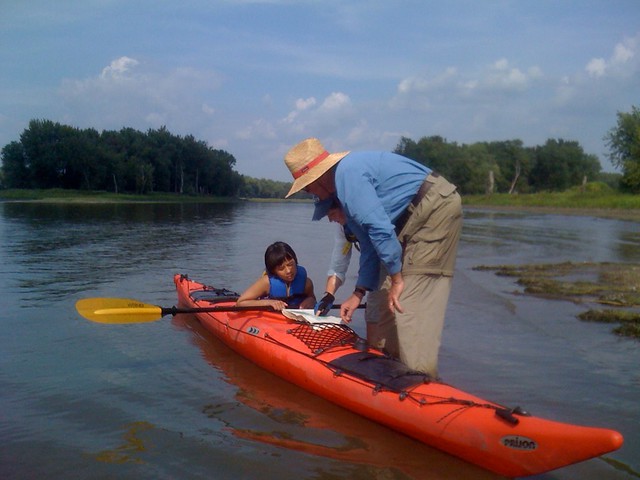 We had an entirely different sort of paddling day today, totally great: Nick and Margaret brought their daughters Jennifer and Kimberly, Jennifer’s friend Eliza, and two canoes to augment our solo kayak, so all SEVEN of us put in at Lynxville for a really fun day of paddling. Here you see Kimberly, age 11, a totally natural kayaker, learning about map navigation from her folks.

We didn’t all make it down to Prairie du Chien, where we had parked the second car. At a certain point, Nick took over with the kayak while the rest of us gamboled at a boat launch, which included Mac getting coated with tire rubber helping to rescue a truck from backing right down into the water along with the boat it was trying to pull out. (There are aspects of being male in this world that I certainly do not envy in the slightest, among them being forcibly enlisted in idiocies that require brute force.)

The day ended with a really great meal with the whole crew at a brewpub down in McGregor, and then we all headed back upstream and Mac and I crashed one last night at the house in Ferryville. What a wonderful time I’ve had with Nick and Margaret and their crew: it feels like the start of a long friendship — actually, more like the continuation of a friendship that was already there.

Oh, and I forgot to tell you that the marker I posted yesterday is not the official Historical Society marker, but one of several put up in the 1930’s by a local doctor and history buff who constructed them out of concrete on his dining room table in Viroqua. In addition to seven markers commemorating the massacre, he also constructed a monument in his hometown “honoring a July 4, 1856 speech by Lucy Stone, which he called ‘the first Woman’s Rights and Anti Slavery ever given by a woman in the great northwest.’” I got all this from an article in the Kickapoo Free Press that Nick gave me, which also offers the local Sheriff’s Report in verse. A sample: