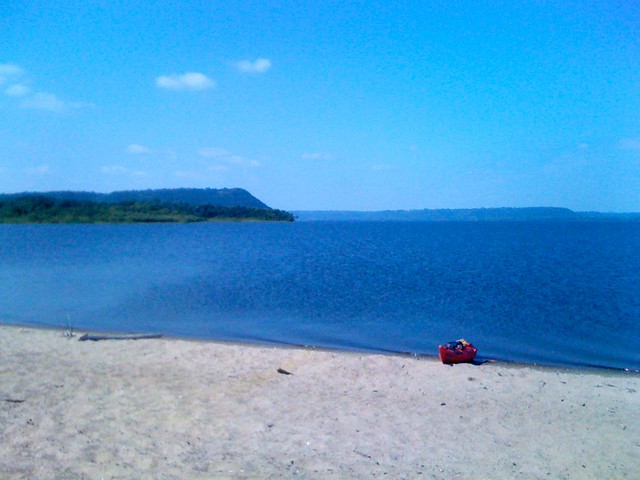 Today’s paddling was one of the harder days I’ve had. Most of it was in Lake Pepin, which swallows any current the river might have at this point, and the wind is not your friend: it comes from the south, and I was paddling mostly east, which makes for a choppy journey. And it got really sunny and hot as the day went on: I thought I was about as tan as I get, but I got some more color today. I was expecting lots of drunken powerboaters and waterskiers (waterskiing was invented on Lake Pepin, who knew?), but thankfully there were hardly any until right before Lake City, where I finished up. There was one guy who had moored his boat in a bit of a cove and was draped asleep, buck naked, across the stern. I definitely had a twinge of jealousy at the sight. I can’t drape myself (naked or clothed) over the back of my kayak, a definite drawback on a beautiful late summer day like today.

The bluff at Frontenac State Park is called Point No Point, and it really is well-named: you see it from a distance as a well-developed point that seems about a mile off, and you paddle for probably more than three miles, and suddenly you’re at the town of Frontenac, and the point never actually materializes as a point. It’s a very curious optical illusion, and it pleases me to be tricked by it just as it has tricked riverboat pilots and fur traders (and pleasure boaters, too, no doubt) for generations.