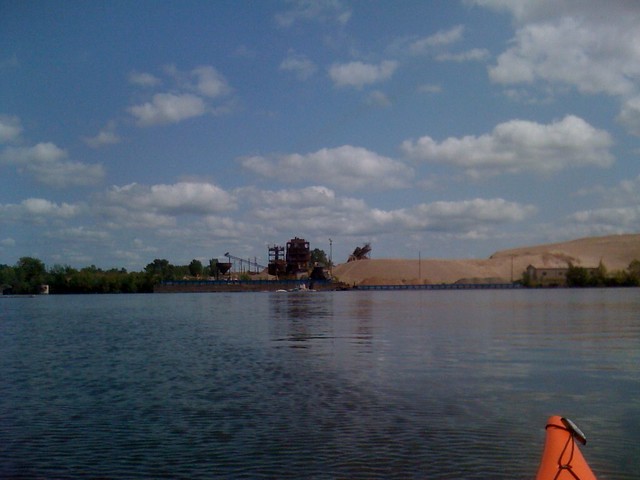 Mary Kay and I started out this morning in some little channels by St. Paul Park (that’s the name of the town), which were a sudden arrival of nature after the industrial river of St. Paul. But lots of work gets done on this river, even with the herons and geese and hawks looking on: there are beautiful piles of sand and gravel, sorted according to color and size (sort of like the honey at the state fair, right Yvan?!), being loaded by giant bulldozers onto barges and sent up and down the river. And there are grain mills and other factories doing all sorts of mysterious industrial things, and in addition to the barges, a whole railway network parallels the river mile after mile, and it’s very easy to imagine this river, my river, that little three foot mass of reeds and cattails I started out in, as an artery of productivity carrying all this stuff from place to place. Because the industry is not spewing visible gunk into the river, because the wildlife seems to be flourishing nearly as much as it was at the headwaters, I end up with this very 19th century Whitmanesque affection for all this human productivity. I was half expecting the Mississippi to look like a garbage dump and smell like raw sewage, and it’s not like that at all, at least not so far.

Mary Kay traded with Heather at the half-way point of the day, and it was delightful to spend some time on the river with Heather: definitely a change from our bike trips! We portaged into a small lake (Rebecca) that parallels the Mississippi and avoids having to lock through Lock and Dam #2, which I thought would be a bit much for her third day kayaking. But the portage was its own adventure: finding a pullout point, hefting the kayaks over the levee and into the lake, which had no easy entry point on the north end, and then doing the whole thing again to get back into the river was its own excellent adventure.

Heather was a game and delightful companion, and I hope she can sneak away for another few days of paddling before I reach New Orleans.