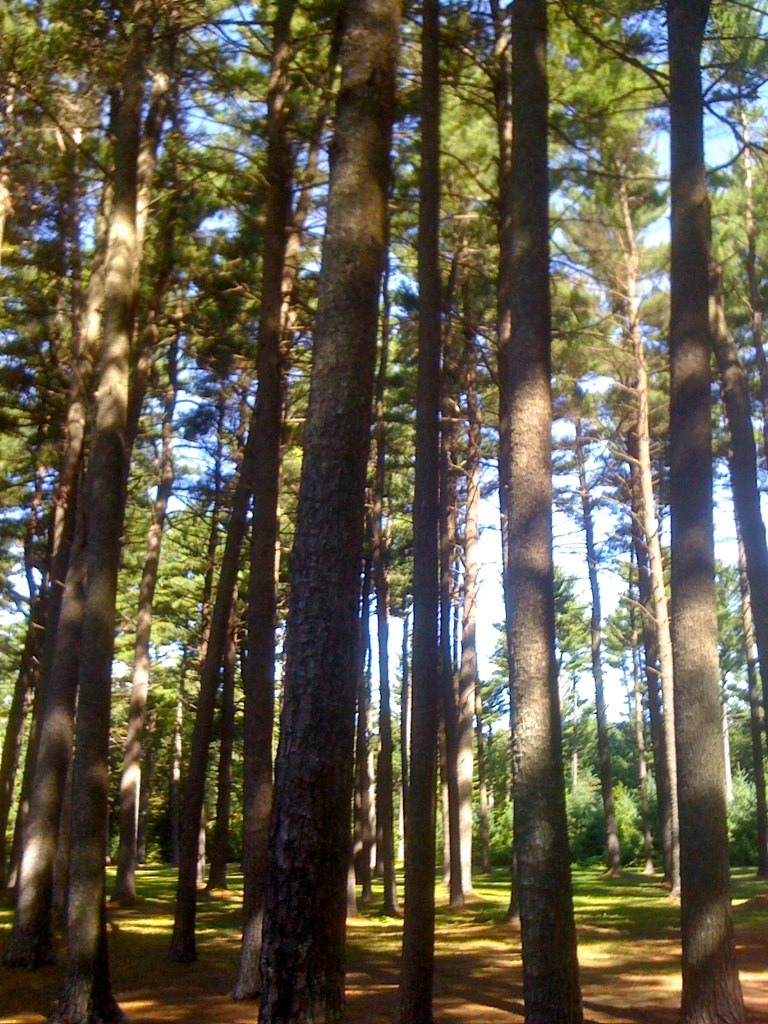 Okay, can I just say I am particularly loving Minnesota today?! Mac and I headed out this morning to Fletcher Creek landing and stopped on the way at Little Elk River, which the sign says had been inhabited by native people since at least 400 BC. The westernmost outpost of the French fur trade was located there in the 1750’s, and more recently, Chief Hole-in-the-Day (Bug-O-Nay-Ge-Shig) lived there, and a mission and townsite were there as well. It’s prairie now, and Mac and I had a bit of a walk as the fog dissipated. A beautiful spot, full of ghosts.

After Mac headed off in the kayak, I drove over to Belle Prairie County Park, where I am sitting completely alone in a pine grove that the DNR map tells me is tended by the Franciscan sisters who have a convent nearby. I waved at Mac as he passed in the kayak — the pine grove overlooks the river. And if all this weren’t enough, there is a power outlet in the shelter, so I am charging up my computer as I write. Gotta love it!

I think I’m going to have to learn some Ojibwe. I finished reading Michael McNally’s book

last night, and the few little threads of Ojibwe language that he explains in the book make me understand that there is huge richness in this language I would like to know more about.

For example, the verb nagamo means both to sing and to pray; ”song and prayer being linguistically inseparable.“ [p. 119] The word gashkendam ”combines in one semantic field associations with lonesomeness, grief, affliction, dejection, homesickness, and melancholy.“ [p. 119] And ”Larry Cloud Morgan closely associated the drum (dewe-igan) with the heart (de-) and with truth (debwe-) and with sound (wewe-), a morpheme that itself connotes particular kinds of wavelike or circular, returning motion.“ [p. 187]

Mac and I have also been dipping into Henry Schoolcraft’s journal most evenings: he’s this totally entertaining combination of adventurer and nerd, and you can’t help but be tickled by him. Here are a few excerpts relating to language specifically:

In going out to dinner at 3 o’clock, a sheet of paper containing conjugations of verbs, which had cost me much time and questioning, had fallen from my table. On returning in the evening, I found my dog, Ponty, a young pet, had torn my care-bought conjugations into small pieces. What was to be done? It was useless to whip the dog, and I scarcely had the courage to commence the labor anew. I consequently did neither; but gathering up the fragments, carefully soaked the gnawed and mutilated parts in warm water, and re-arranged and sealed them together. And before bedtime I had restored the manuscript so as to be intelligibly read. I imposed this task upon myself, but, had it been imposed by another, I would have been ready to pronounce him a madman.

Devoted the day to the Indian language. It scarcely seems possible that any two languages should be more unlike, or have fewer points of resemblance, than the English and Ojibwa. If an individual from one of the nomadic tribes of farther Asia were suddenly set down in London, he could hardly be more struck with the difference in buildings, dress, manners, and customs, than with the utter discrepance in the sounds of words, and the grammatical structure of sentences. The Ojibwa has this advantage, considered as the material of future improvement; it is entirely homogeneous, and admits of philosophical principles being carried out, with very few, if any, of those exceptions which so disfigure English grammar, and present such appalling obstacles to foreigners in learning the language.

5th [Jan] Gitche ie nay gow ge ait che gah, “they have put the sand over him” is a common expression among the Indians to indicate that a man is dead and buried. Another mode, delicate and refined in its character, is to suffix the inflection for perfect past tense, bun, to a man’s name. Thus Washington e bun would indicate that Washington is no more.

The Chippewas are apt to connect all their ghost stories with fire. A lighted fire on the grave has a strong connection with this idea, as if they deemed some mysterious analogy to exist between spirituality and fire. Their name for ghost is Jeebi, a word rendered plural in ug.

I am hereby proposing that the early 20th century expression ”heebie-jeebies” is a rhyming expansion of the Ojibwe word for ghost. Richard, you’re the linguist, what do you say?!?!