Today's entry in A Book of Days is not one of my pieces. Instead, I am posting a radio talk my father gave to commemorate the 60th anniversary of the Armenian genocide. I hope you find it meaningful.

This program was originally broadcast in 1975 on KUSC Los Angeles; in 2015, I found and transferred a cassette copy. The transcription was made using tools available at the sadly now defunct website popuparchive. I left unedited the computer's attempt to understand the Armenian lyrics of the music of the Divine Liturgy because I fell in love with its accidental poetry. The actual text of the liturgy is very beautiful; you can find it in transliterated Armenian and English here. The recording of the Divine Liturgy heard in this program is still available on The Music of Komitas. 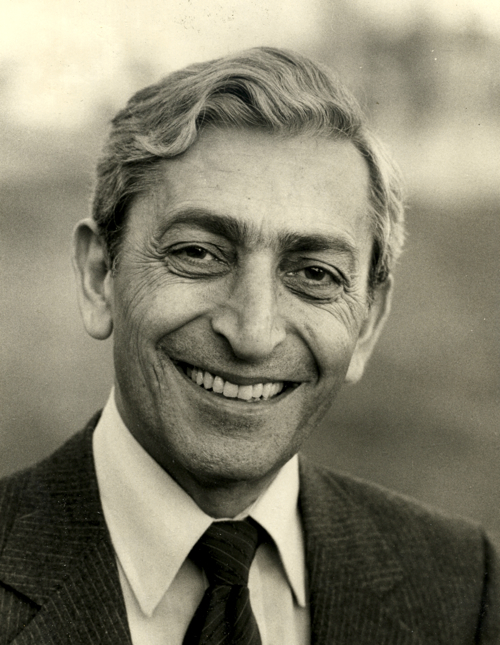 My father made this radio program when he was 48, the same age as his father had been when he died. My father is a bit older in this photograph, maybe in his mid 50s. A bit of biography: he came to the US in 1947 on a freighter from Tehran, studied music composition on scholarship, first at Boston University and then at the University of Michigan. He married my mother in 1950, played the viola in the Seventh Army Symphony from 1951-53 in towns across Germany, and then returned to get his DMA from Michigan in 1958. I was born that same year, and my brother, Spencer, in 1960. Along with composing, my father worked in music publishing and various non-profits, eventually becoming the Dean of the School of Performing Arts at the University of Southern California from 1969-1983. He went on to lead the National Foundation for Advancement in the Arts in Miami, and finally an internet educational project called Thinkquest, sponsored by Oracle. He died in 2002, at the age of 74. 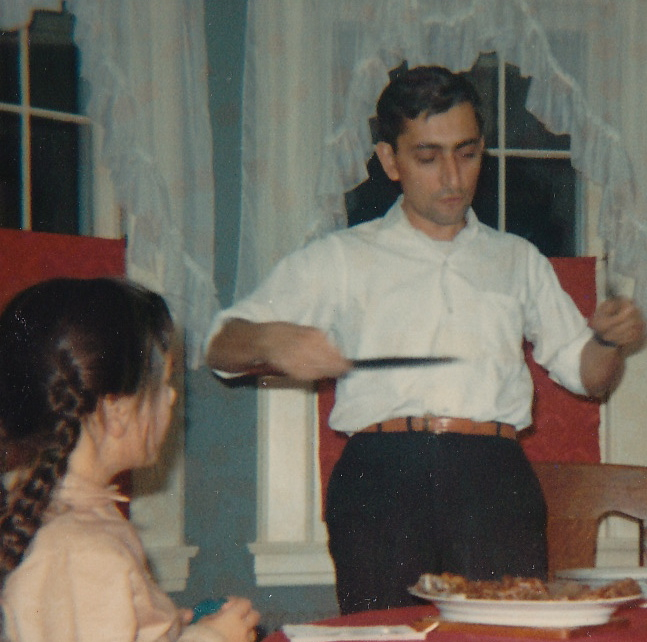 My father and I at the dinner table in Glen Rock, New Jersey, sometime in the late 1960s, around the time that we went to the Armenian Church for Easter. 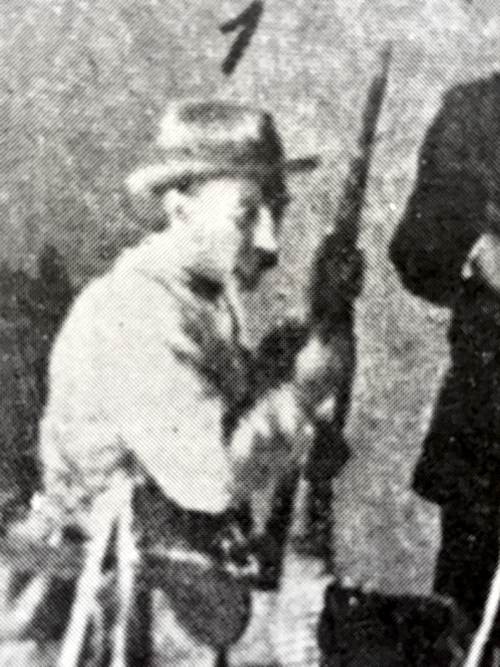 Garabed Baylarian, probably a relative on my father's paternal side, during the defense of Van, in 1915. 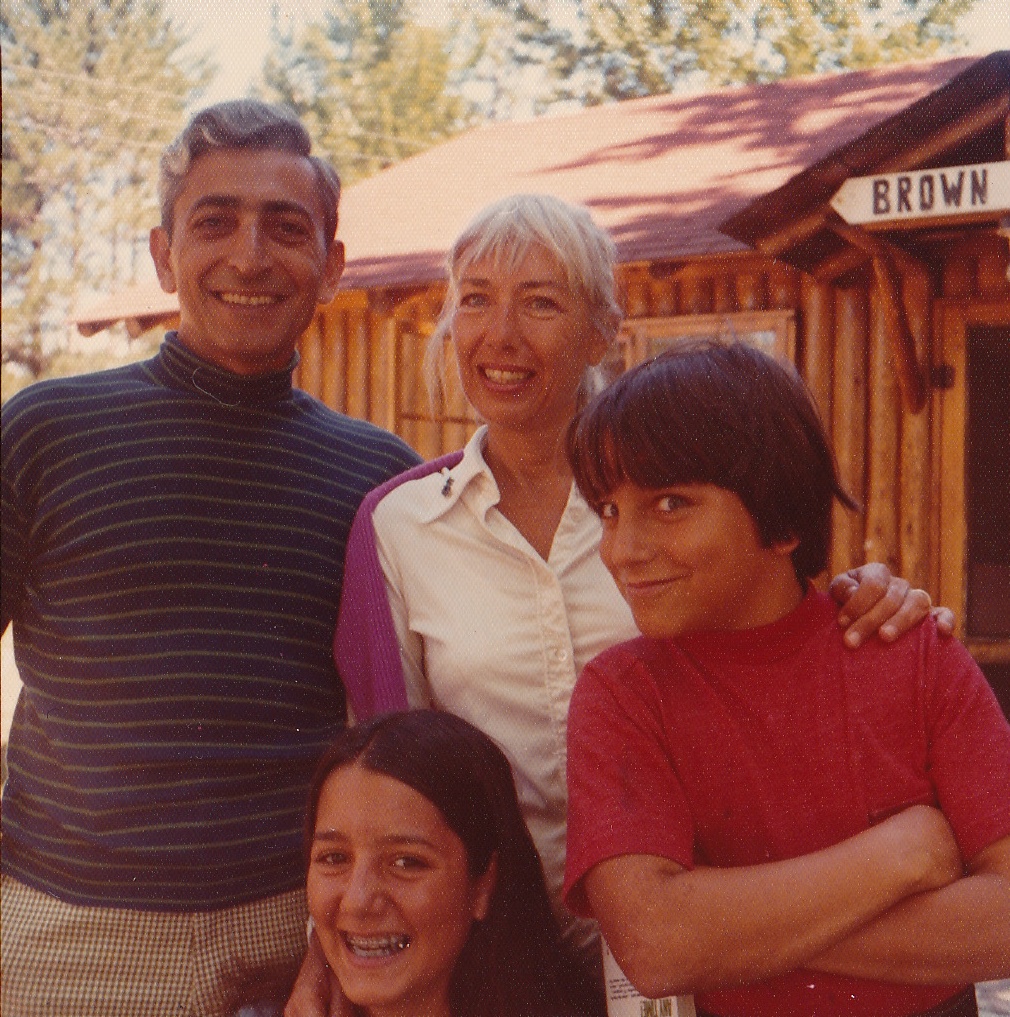 The Beglarians on summer vacation in Michigan in 1972, when I was fourteen, soon after the trip to Greece he describes in the program. 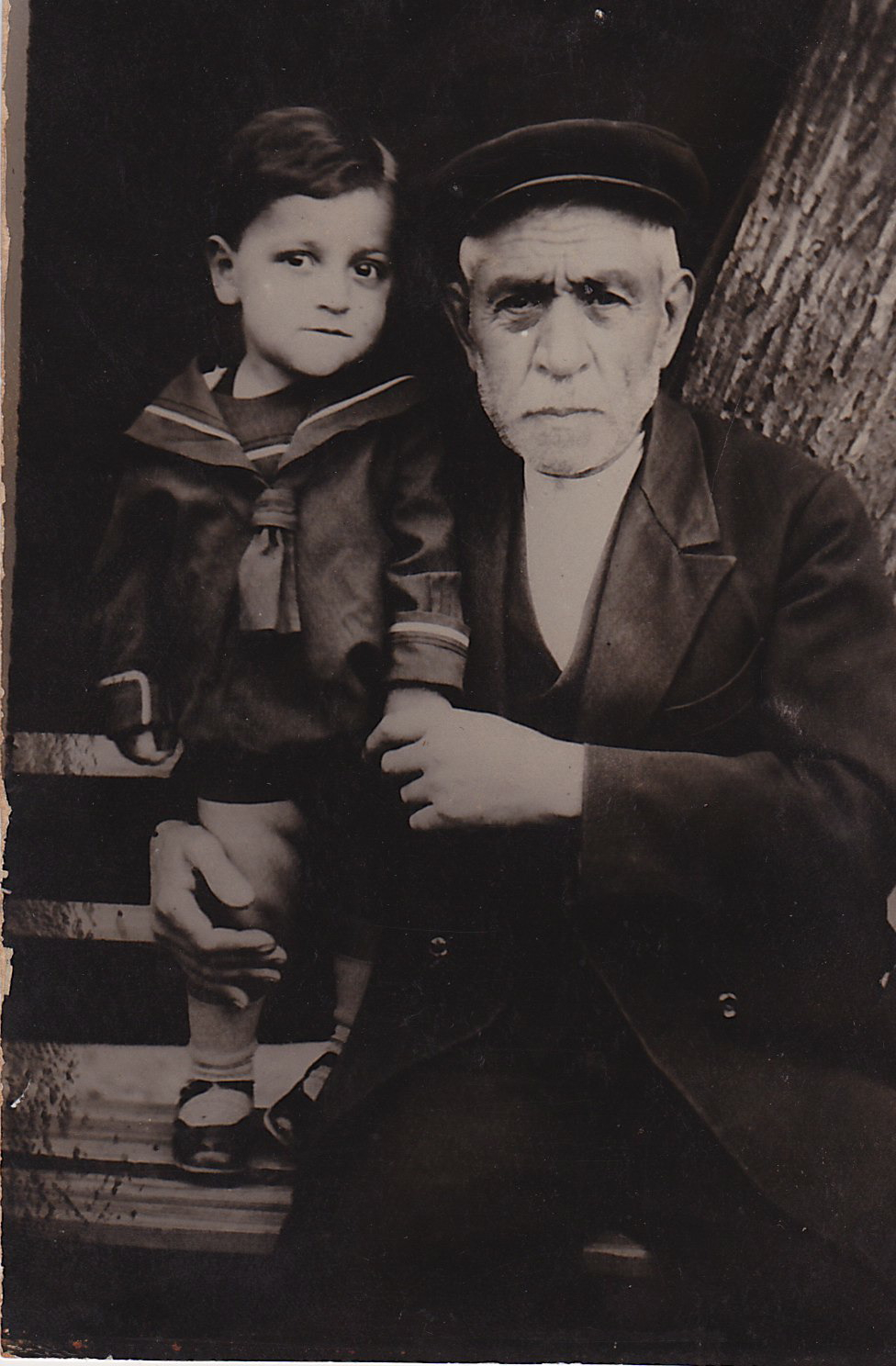 My father in 1930, probably in Tiflis. Perhaps the man is his grandfather? I do not know. 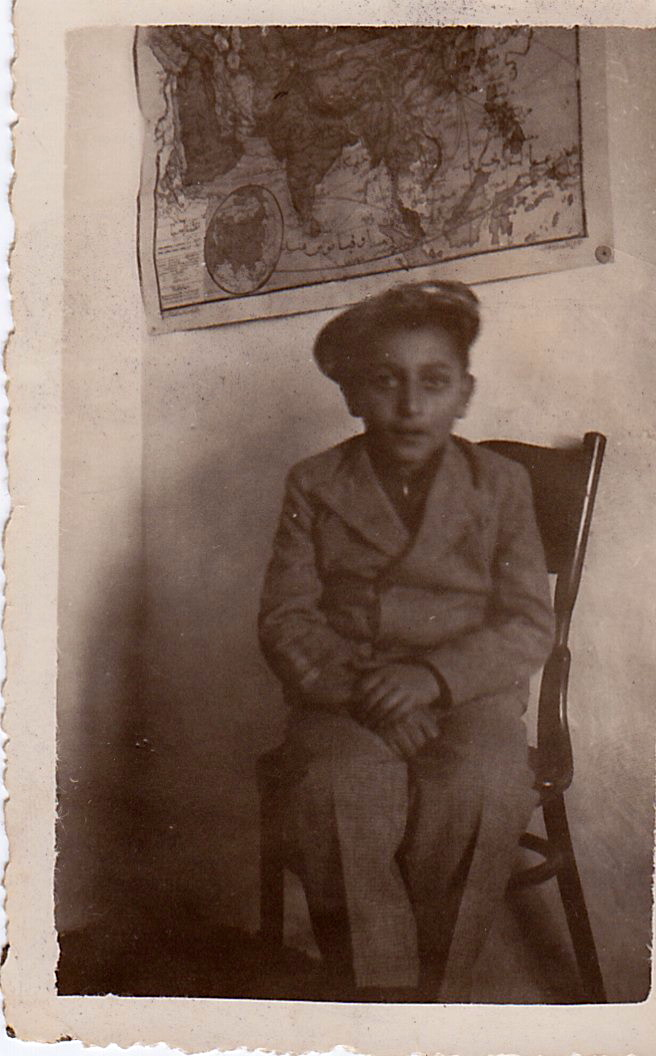 My father in 1938, probably in Tehran. By this time, his mother had died, but I do not know if his father was still living. 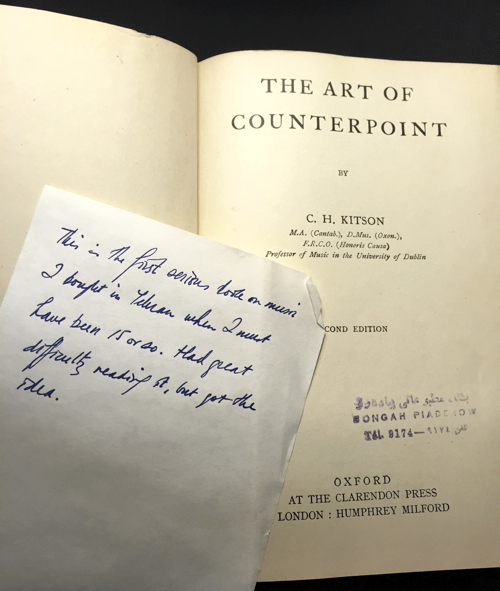 Going through one of many boxes of my father's things the other day, I came upon a book with this note inside. He knew I would find it eventually. 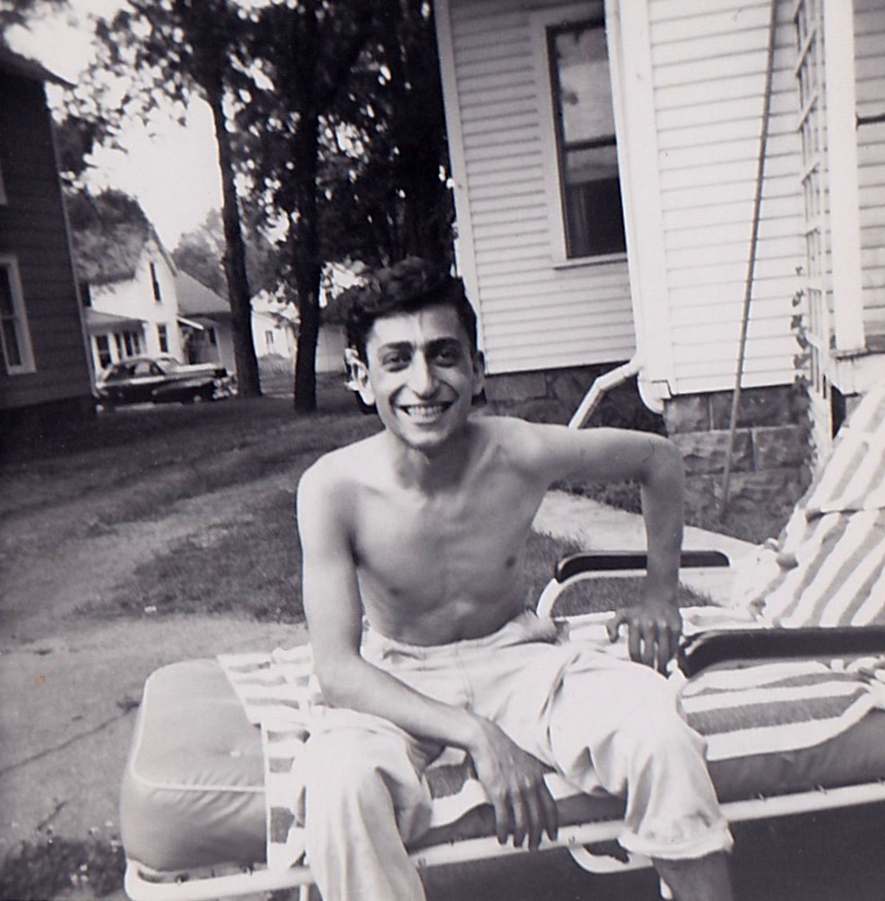 My father in Michigan in 1949 or 1950, a couple of years after he arrived in America, and not long after he met my mother. 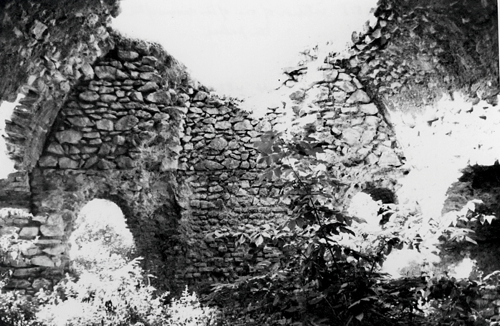 Several years ago, I was researching the poetry of Sa'di for a choral commission from the Los Angeles Master Chorale. One of Sa'di's books is called the Gulistan, which means Rose Garden. I was wandering around on the internet tracing the word "gulistan", and happened upon a list of the Melikdoms of Karabakh, five small kingdoms that existed from the 15th century until the early 19th century in the now-disputed area of Nagorno Karabakh. The Beglarians were the Meliks of Gulistan! This is what my father must have found in his adolescent researches. I just found this photograph of the ruins of the Beglarian castle(!) on the internet. A photograph of Komitas. 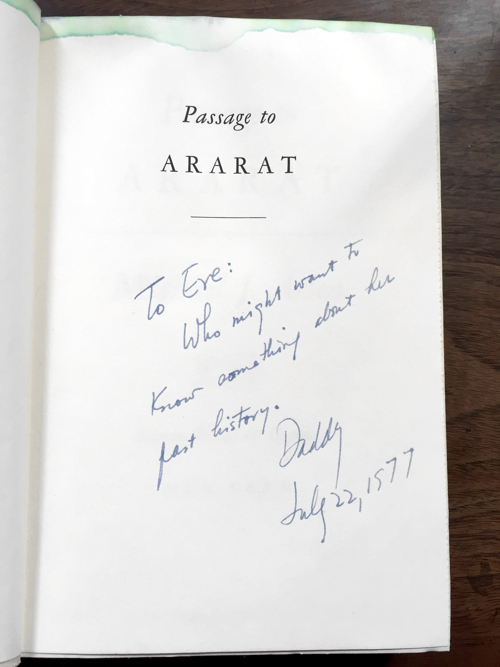 This is the inscription on the frontispiece of my copy of Michael J. Arlen's Passage to Ararat. I often think about the complexity of my father's relationship to his heritage, the fact that he told my brother and me very little about his background and childhood, never taught us the language, did everything he could to make sure we were "real" Americans. Or perhaps he meant for us to be citizens of the world, free of the hatreds and violence that tribalism, whether ethnic or religious, seems to engender. But as he was dying, he charged me in no uncertain terms to explore my Armenian roots. I have begun that journey on a cultural and historical basis. I have read books and looked at art and listened to music. I have written several pieces that incorporate Armenian melodic sources, which you can listen to here

and here and here. In the beginning of 2020, I wrote a big piece for duduk (Arsen Petrosyan), percussion (Pejman Hadadi), and string quartet, scheduled to premiere in Houston with the Apollo Chamber Players in March, a premiere that has of course been indefinitely postponed. And I still haven't yet visited Van (now in eastern Turkey), or Armenia, or Nagorno Karabakh, or Tiflis/Tbilisi, or Tehran. It is long since time for me to make those physical journeys, to connect the dim and scattered fragments of my Armenian past to the person I have become in the present. These journeys are my highest priority when travel again becomes possible.