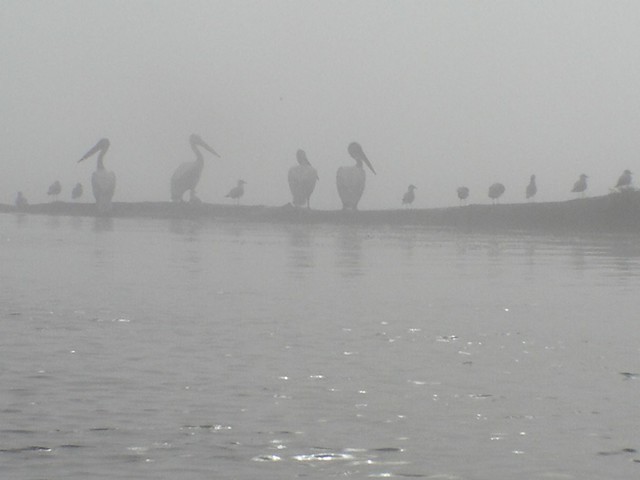 Monday we finally left Wabasha for real: I started out from Minnieska in some pretty gorgeous fog and before I could even get out of the main channel, the phone rang, and it was David Echelard, countertenor and hurdy-gurdy player, a good friend of my old friend Jeff, who invited us to stay at his house in town, OR out in a slough where he has a boathouse, OR to show us some cool hidden campsites. I put Mac and him in touch to figure it out and by the time I got going in earnest, I could actually see a little bit, definitely a good thing, ’cause this being Labor Day, there were really A LOT of powerboats and jet skis and all that, not to speak of the towboats and barges, who don’t seem to get a day off from their laboring.

I had a long wait at Lock 5A (it got put in after the Army Corps had designed and numbered all the other locks; they suddenly realized that without it, Winona would get flooded out. Oops! Glad you caught that little design error, guys…), so I didn’t arrive until about four, and we went out to David’s very excellent boathouse, which Mac had wisely chosen for us from all the riches David had laid before us. This boathouse deal is something new for me: a series of sheds, really, like garages out on the water, that people fix up and appoint to various levels of fabulousness and use sort of as retreats, hanging out there even when they aren’t boating at all. David told us he did most of the memorization work for Anthony Gatto’s opera out there, something I really like picturing. Gertrude Stein would definitely be pleased.

David paid us a visit as we were finishing up dinner, and we had a great time together. He and I had been on a concert together in Minneapolis in maybe 1991 or something, but haven’t seen each other since, so there was a lot to talk about! We had such a fine time that it was well after dark when he went back to town and Mac led us out to the slough where he and Mary Kay had set up camp in the afternoon. It was very cool to bed down in my hammock in the dark having no clue what my surroundings actually were.

Here’s the view of the slough that greeted me from my hammock in the morning: 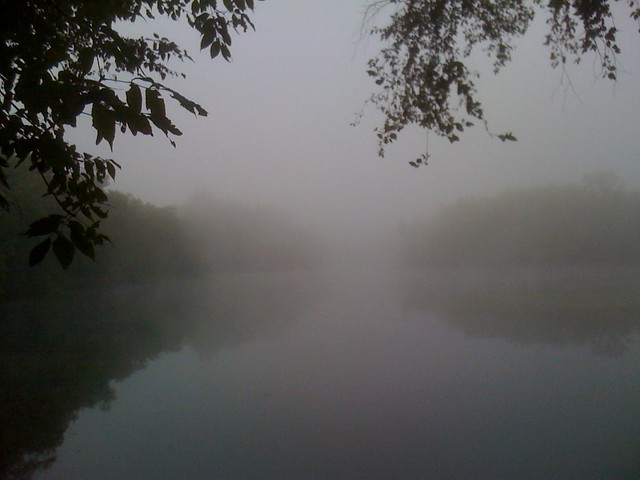 Pretty great, no?
And last night, after Mary Kay’s long day of paddling, we all gathered at David and Suzanne’s for a great meal, and David played us some of his multitracked countertenoring (really beautiful) and I had the first shower since I can’t even remember when, and we got to meet their very fine son, Hudson, who turns 14 in a couple of days, and then we headed back out to the slough, where this gorgeous hunk of a dog came out of the dark and greeted us as we parked the car, and accompanied us out to the camp, and ended up staying the night. He decided to sleep directly under my hammock, which I really loved, except that every hour or so he would rouse himself and go dive off into the slough (hunting? a moonlight dip?) with a serious splash, so my sleep last night was just a series of dognaps, and I’m definitely ready for another one right about now…