“an account of my peregrination” is what Elizabeth House Trist called her travel diary, written for her friend Thomas Jefferson as she journeyed from Philadelphia to Natchez in 1783-84

[The old people] have but one Son who is married and has a house full of children. They have given all up to this son and have a room in the House; he maintains them. It gave me pleasure to see so much harmony subsist among them. The son’s wife told me they had lived together fourteen years, and she never saw the old people out of temper. They are very religious presbeterians; prayers before every meal and after; but their conversation chearfull and happy. I believe if there are good people in the world, they are to be found at this place. My heart overflow’d with benevolence, for it could not be envy to see an old couple that had lived Sixty years together endeavoring to please each other and to make every one as happy as themselves. A true picture of rural felicity: God continue to grant you his blessing, my worthy old man and Woman. p. 204

[Pittsburgh] Grants Hill is a delightfull situation. I think I would give the preference for to live on [the hill] as you are more in the World. The river is more confined, but the Objects are not so deminitive below you. p. 213

I dont like this river. The passage is attended with much more danger than I had any Idea of.  p. 226

[15 June 1784] Every one thinks their troubles the greatest, but I have seen so many poor creatures since I left home who’s situation has been so wretched, that I shall begin to consider my self as a favord child of fortune. p. 226 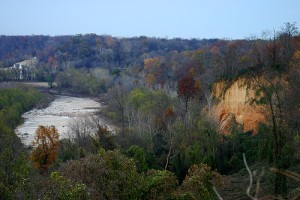 [18 June 1784, at the Chicasaw Bluffs] I some times conceit — I am got to the fag end of the world; or rather that it is the last of Gods creation and the Seventh day came before it was quite finnish’d. At other times, I fancy there has been some great revolution in nature, and this great body of water has forced a passage were it was not intended and tore up all before it. The banks are now about 50 feet high, very ragged, and every here and there great pieces of the earth tumbling in to the water. Often great trees go with it, which fill the river with logs. Some places along shore there will be great rafts of fallen timber. The water is as muddy as a pond that has been frequently visited by hogs. Alltogether its appearance is awfull and Melancholy and some times terrific.

[19 June 1784] This is a Passionate sort of a climate, quickly raised but soon blows over.

[30 June 1784 Great Gulph, 75 miles from the Yasou] A Mullato Woman nam’d Nelly was exceeding kind to us, gave us water mellons, green corn, apples — in short, everything that she had was at our service. Her conversation favord rather more the Masculine than was agreeable. Yet I cou’d not help likeing the creature, she was so hospitable. She gave us the history of her life. She may be entitled to merit from some of her actions. But chastity is not among the number of her virtues.

Pervading the earliest expressions of the autobiographical impulse in America, we find, according to Patricia Caldwell

, “the important alliance between migration and conversion,” a consequence of the passage across the ocean that made the first white settlers in New England a unique people. The narratives testify to the continuing validity of this association between spatial movement and psychological transformation to later generations of American life-writers.