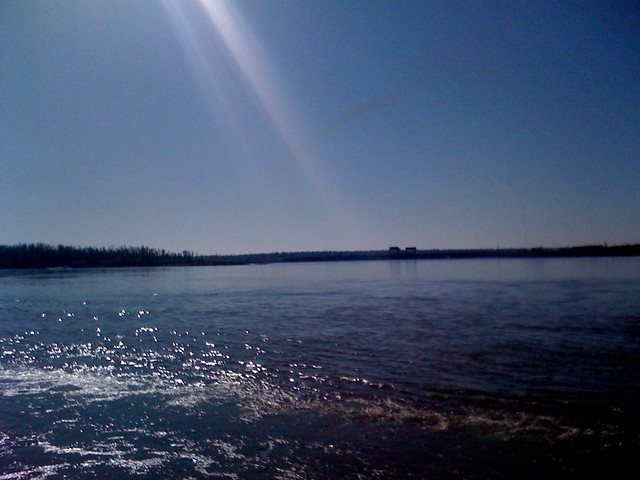 here are some selected bits from the chapter on the Atchafalaya in John McPhee’s 1989 book, The Control of Nature

“It has a tendency to go through just anywheres you can call for.”
Why, then, had the Mississippi not jumped the bank and long since diverted to the Atchafalaya?
“Because they’re watching it close,” said Rabalais. “It’s under close surveillance.”  [p. 9]
*
“The greatest arrogance was the stealing of the sun,” he said.
“The second-greatest arrogance is running rivers backward.
The third greatest arrogance is trying to hold the Mississippi in place.
The ancient channels of the river go almost to Texas.
Human beings have tried to restrict the river to one course —
that’s where the arrogance began.”
–Oliver Houch, law professor at Tulane. [p. 11]
*
“The river used to meander all over its floodplain. People would move their tepees, and that was that. You can’t move Vicksburg.”
–Herbert Kassner, PR Director, New Orleans District, ACOE [p. 32]
*
“If the profession of an engineer were not based upon exact science, I might tremble for the result, in view of the immensity of the interests dependent on my success. But every atom that moves onward in the river, from the moment it leaves its home among the crystal springs or mountain snows, throughout the fifteen hundred leagues of its devious pathway, until it is finally lost in the vast water of the Gulf, is controlled by laws as fixed and certain as those which direct the majestic march of the heavenly spheres. Every phenomenon and apparent eccentricity of the river — its scourging and depositing action, its caving banks, the formation of the bars at its mouth, the effect of the waves and tides of the sea upon its currents and deposits — is controlled by law as immutable as the Creator, and the engineer need only to be insured that he does not ignore the existence of any of these laws, to feel positively certain of the results he aims at.”
–James B Eads, quoted on pp. 38-39
*
“The Corps of Engineers is convinced that the Mississippi River can be convinced to remain where it is.”
–Fred Chatry (chief of the engineering division for the New Orleans District of the ACoE)
*
“The Corps of Engineers — they’re scared as hell. They don’t know what’s going to happen. This is planned chaos. The more planning they do, the more chaotic it is. Nobody knows exactly where it’s going to end.”
–Raphael Kazmann, hydrologic engineer, LSU emeritus
*
Tarzan of the Apes once leaped about among the live oaks in the park [at Morgan City.] The first Tarzan movie was filmed in Morgan City. The Atchafalaya swamp was Tarzan’s jungle. Black extras in constumes pretended they were Africans. [p. 84]
Logging In...