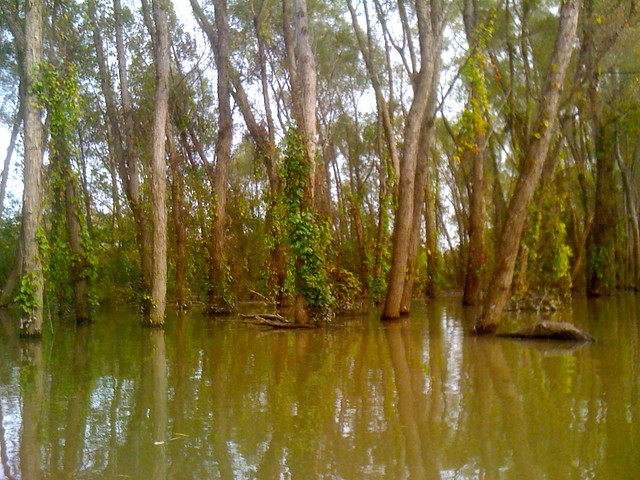 Stephanie, Mark’s wife, is a dancer who splits her time between New York and Lake Village. (Mark grew up in Mississippi, but went to school at CUNY and Stony Brook, and we had met once in NYC a while ago.) She threw herself into this adventure with great aplomb! On Thursday, we took a good bike ride to explore north of Lake Village, where there’s a channel marked on the map as the Old River. We were looking for possible put-in points for a paddle, but the Army Corps maps don’t cover all the back channels of the Mississippi, since the maps are optimized for barges and towboats, not for kayakers who prefer the back ways and side trips. We rode past a huge dam out in the fields, and near it is a perfect boat ramp, completely empty and unused. I’ve been avoiding the main river when I’m traveling alone: my vision of this journey does not include drowning, or even capsizing. So every chance I have to get on the river these days feels like a wonderful gift, and the back channels down here are strange and mystical places. Towards the end of our leisurely paddle Friday, which we treated more like a float, I noticed that there is a back channel to this Old River, which is of course already a back channel of the present Mississippi, so I left Stephanie and paddled around the long way, which must once have been the main river, because the state line is drawn along this tiny back slough. We met up again at the pullout, and retrieved cars and kayaks and headed home for a quick shower and then over to Winterville Mounds, where Mark works. We got there in time for Mark to show me around a bit before dark, and he told me a great story about the Native Americans accosting De Soto’s people in huge canoes each painted in a different primary color, and the paddles and the men themselves painted to match the canoes. Can you imagine how terrified De Soto’s troops must have been to see these brightly painted warriors paddling out into the main river, with their drums and their fierce songs?!? They didn’t kill De Soto’s band, but would come up to their boats and rock them until they tipped over, basically messing with them, hazing them, before disappearing back up the Deer River to Winterville. De Soto’s people decided soon after that to forget about the gold and treasure they had been seeking and just go home. De Soto himself was already dead and consigned to the river: legend has it that he was buried in what is now Lake Chicot, the lake Mark and Stephanie’s house is on.

We drove up to Rosedale for dinner at a good restaurant with very slow service, so we were late to the show at Po’ Monkey’s, a storied juke joint way out on a farm road sort of near Cleveland. A group of electro-acoustic musicians had taken over the place for an evening jam, which Mark had been asked to join. None of the regulars were there, apparently last year’s version was enough for them. And I’ll tell you, I mean no disrespect, but the whole scene rendered me almost inarticulate with despair. Here’s this whole group of musicians and composers from all over the country, who have shown up for a festival of electronic music, and they come down and jam badly for one another, jamming after all not being exactly what they are skilled at, and they congratulate themselves for playing in a juke joint, despite the fact that no-one from the actual community, not one regular is in the place. And then I overhear one guy saying to Mark Snyder, the festival organizer, that another guy is “being a girl” about getting up and playing: he keeps saying he’ll join in after the next song. And to Mark Snyder’s credit, he called the guy on it, claimed not to know what he meant, asked for clarification that had the guy sputtering a bit. But sitting there as one of three women in the whole place, electro-acoustic festivals in general and this one not exceptionally being something of a boy’s club, I was not exactly offended, I think a better word would be heartbroken. In this day and age a full-grown nominally educated guy actually casually and unthinkingly derides someone by calling them a girl?! Are you kidding me?!? I don’t know that guy, he might be an otherwise lovely and talented human being, but I hope women steer clear of him for the rest of his natural life.

But Mark Snyder’s sly and effective response really got me thinking. I have had occurrences in the past couple of weeks where white people have said things I regard as racist. And I struggle really hard to know how to calibrate my response. I remember being in a cab once in New York with my friend Juliana, and the cabdriver said something racist and she immediately said something like, I don’t agree with or accept your way of talking, and please do not speak that way while I am in your cab. But that’s a slightly less complicated situation: Juliana did not have any relationship with the cab driver beyond an economic exchange. But when people are hosting you, or doing you favors, or being generous to you, how do you indicate your dismay and disagreement with the language they use, the attitudes they express? My answer so far has been to think more like an anthropologist: I’m trying to understand how people are rather than judging them or arguing with them. And perhaps my way has some tiny impact, however inconsequential. The person who made the most racist statements I’ve had to listen to also noticed and commented on my interest in black music and culture, and told me some useful information about the history and geography of black music and musicians.

The discussion at the BB King Museum the other night was full of talk about the complicity of the North in racism, claiming that Northerners, even abolitionists, didn’t actually like black people any more than Southerners did, and in certain ways understand black culture far less than Southerners do. Martin Luther King said he was more scared of the white racists in Chicago than he ever was down South. And of course, there are proportionally so many more black people down here than up North, and I do think there’s a complexity to the whole question of racism that I’m not going to address productively by demanding an old man to change his vocabulary so as not to wound my sensibilities. That man has lived and worked side by side with black people all his life. Let’s be real here: his daily life is in certain ways more integrated than the new music scene in New York City, uptown, downtown, or midtown. That’s part of the reason I’m not in New York right now, I’m trying to get some perspective on my own provincialism.

But it’s easy to be shocked. I am definitely not at home. Black or white, rich or poor, in one way or another, I am aware that I am an outsider, I do not really fit in here anywhere. Which is why hanging out with Mark and Stephanie is very welcome right now. It feels like a break from constantly negotiating my own otherness.