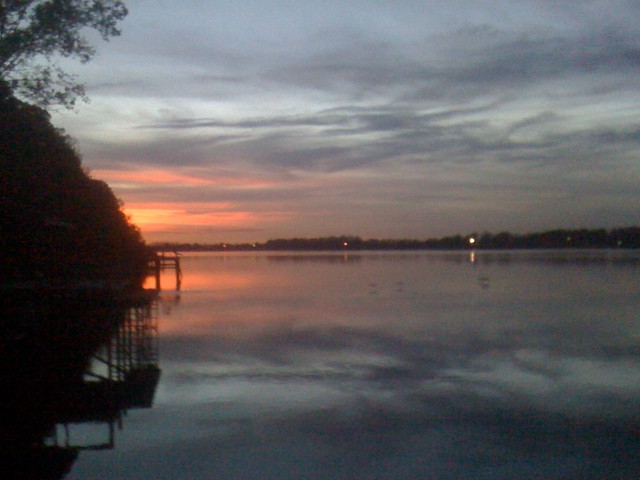 Monday morning, I drove down to Rosedale and headed first to the library, where Martha the librarian gave me an excellent orientation to the town and its history. Turns out this area was a big center for making moonshine during Prohibition — instead of the requisite cannon displayed in front of the State Park visitor center, there’s a whiskey still. The most famous moonshiner was a guy named Perry Martin, who was the son of a successful rice farmer, and had trained for the ministry. He lived on a houseboat on the river side of the levee, and had a bunch of stills set up on Big Island. He eventually built a house on the dry side of the levee, got sick the first night he slept there and never did again. But he would come over the levee every day for lunch with his wife.

I camped out for two nights like Perry Martin, on the river side of the levee, in the state park. The weather is beautiful–clear and warm–and I can sleep in the hammock without the tarp over me, so I get to look at the stars as I fall asleep, and wake up with the dawn. I’ve been doing a good deal of reading: finally got to Lanterns on the Levee

, which is a heartbreaking book. The wisdom and the wrongness are so inextricably interwoven, there’s no way to pull them apart. And it’s not just that Will Percy is a white supremicist aristocrat living past his time, it’s also that he is so obviously a closeted self-lacerating gay man who knows he will never live up to his father’s standards. It is a tragic and awful book, but it is beautiful. Read it and weep.

The towns here are hideously far apart: to find an internet cafe, I had to drive 35 miles to Cleveland, where there’s a great coffee place in an old gas station, they roll up the garage doors and you sit in the former repair bay as if it were a terrace.

On Wednesday, I drove down a bit, past the town where Baby Doll

was filmed, up to the levee and then biked around the area where the levee broke in the 1927 flood. There were No Trespassing signs everywhere, and I was spooked into imagining someone might shoot me for ignoring them, so I loaded the bike back on the car and drove down into Greenville, which, like all these Delta downtowns except maybe Cleveland, the college town, seems at first glance to be in such a state of decay and poverty that you can hardly imagine how people continue to live here. The buildings in best repair downtown are the churches, including the one built by Will Percy’s Dutch tutor and priest with his own money, (see pp. 86-91 of Lanterns on the Levee), and the synagogue (there has always been a thriving Jewish population in Greenville), and the First AME, which has been visited by Langston Hughes and Leontyne Price (and Herbert Hoover during the flood.)

I had made a plan to meet up with the musician and ethnomusicologist Mark Howell and his wife, Stephanie, at the BB King Museum in Indianola, so I drove out the back way through Leland, site of the old Percy plantation, where there is now quite a nice town with houses along a bayou, and arrived in time to meet up with Mark and Stephanie and hear an interesting panel discussion about this book

. Afterwards, Mark and Stephanie and I had dinner and headed over to Lake Village, which is the town across the river from Greenville on the Arkansas side. Mark, with the help of his father and brother, has built a house right on Lake Chicot, based on a design adapted from excavation data for a Mississippian-era house in the Delta. It is a totally great place, surrounded by just enough trees to feel cozy but not obscure the view of the lake. And the light is gorgeous! I went down to the dock and watched the sun set into the lake while having a fine long call with Despina in Athens, and a little gray cat came and sat on my lap and sang a song to me, and I am very happy to be here.