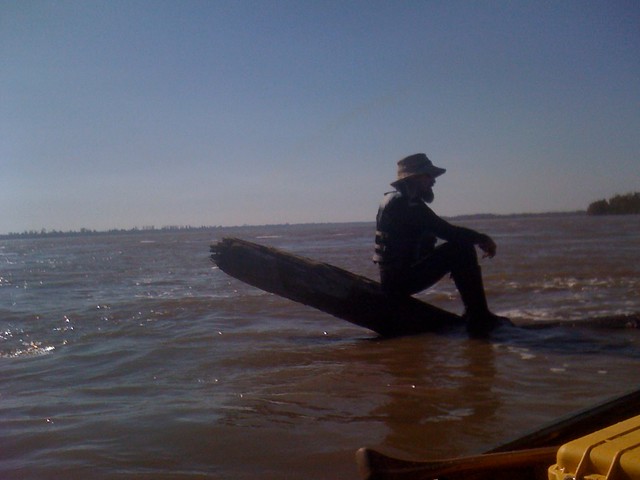 John had invited me to join him on an all-day paddle he was scheduled to do Saturday with a father and son, so I was awakened early from the hammock I had set up behind his shop and overlooking the Sunflower River, with John offering me coffee and oatmeal and introducing me to Ellis Johnson, a younger brother of Super Chikan Johnson, one of the outstanding blues players flourishing in Clarksdale. Ellis himself is more dancer than musician, he said, and he is also a fisherman, and he told me about the huge turtle he caught the other day.

Tim, a prep-school fundraiser, and his college-age son, David, showed up and got outfitted, and then we all headed out to Quapaw landing and put in. It’s my first paddling since above Memphis, and it’s hard to articulate how happy I am to be back on the water. It’s a strange reality that as the boundary between water and land gets more porous down here, with all the back channels and bayous and swamps, getting to the river from land actually gets harder and harder, so my bike rides don’t really bring me close enough to the river to fully satisfy my river jones. It makes sense: the bottomlands are a no-man’s-land where it is not practical to imagine permanent roads or houses. The river side of the levees are in a sense already the river.

Paddling with John, who knows this river the way I know the streets of New York City, is really a wonderful experience. We did all sorts of things I would never have been able to do alone. Instead of freaking out about the big stuff floating down the river, for example, we took advantage of its speed and power. We tied off to a huge tree that was plowing downstream and just effortlessly coasted down through the windy stretch. I was finally truly rafting the Mississippi! A giant barge and tow were coming downstream at the same time, and watching it pass us at an excruciatingly slow pace — since we were traveling nearly as fast — reminded me of that endless circus trailer in Bela Tarr’s Werckmeister Harmonies.

We stopped at two different blue holes to eat and explore, and then John began to take us into back channels, wending through groves of trees. I could happily paddle back through thickets finding oxbow lakes and odd back bayous for many days to come. I think what I like the very best about this lower river is these liminal spaces, neither land nor river, exactly, but some curious inseparable hybrid of the two. 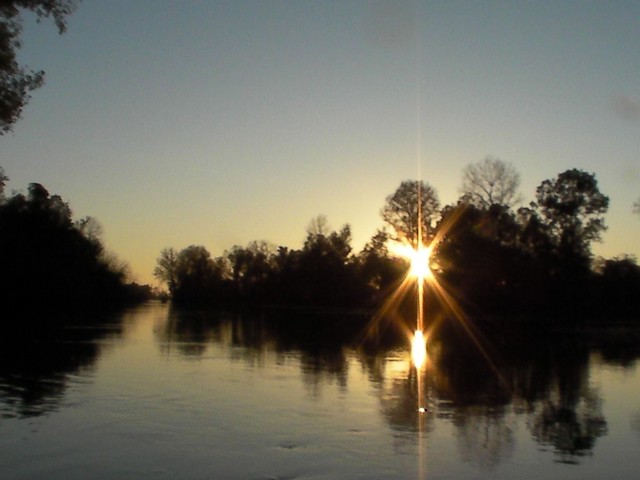 John took us through one final back channel right near sunset, and we paddled into the setting sun surrounded by birds and the departing light. I didn’t want the day to end, but paddling up a good ways and then across the main channel in the dark was tiring enough that I was happy when we finally landed and Ellis pulled us out and took us home to Clarksdale. 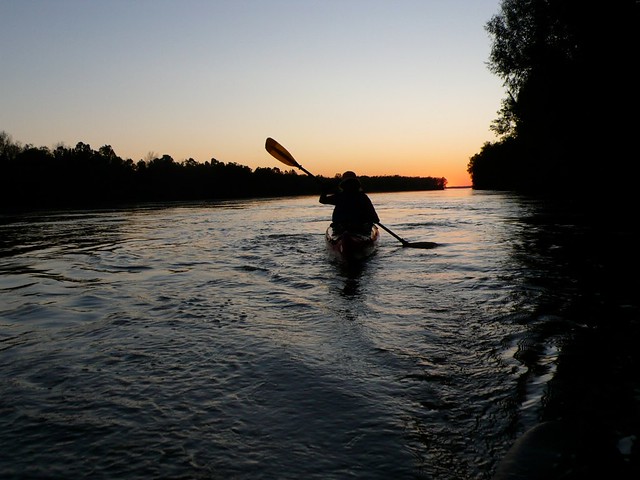