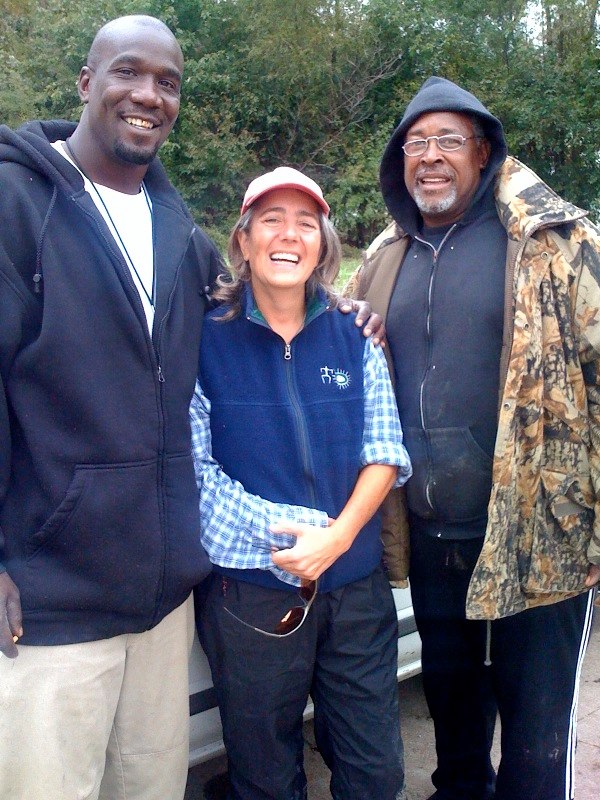 Monday morning, after a stop at REI (the Minneapolis REI had been full of depressive unhelpful staff, but the folks at the St. Louis REI were great: they taught us a new knot and some handy tarp tips so that we can avoid hammock baths in the future) we headed back to North Riverfront Park to put in for a quick paddle down to the arch. Two fisherman showed up to marvel (“like Tom Sawyer,” Kermit said) and generously helped us get the kayak through the mud and into the river. I have now gotten in and out of the river more times at North Riverfront Park than any other launch on this river, and I have to say it is by far the worst-maintained I have used on the entire trip. I have never been to this park when there weren’t many people here, fishing, hanging out, whatever, and I find it completely obscene that a major city can’t manage to pave the road to be driveable, keep the boat launch functional (it’s technically closed because no-one but canoes or kayaks could actually manage to put in here), and supply minimal services like portapotties, etc. to the people who use this park. Does the city really feel that poor people don’t need even minimal maintenance on the parks in their neighborhoods — only the rich need fresh air, fishing and boat access, and views of the river?!? It’s really outrageous. Someone could organize a Habitat- or CCC-like park construction project here and do a great service both for and with the people of this neighborhood. 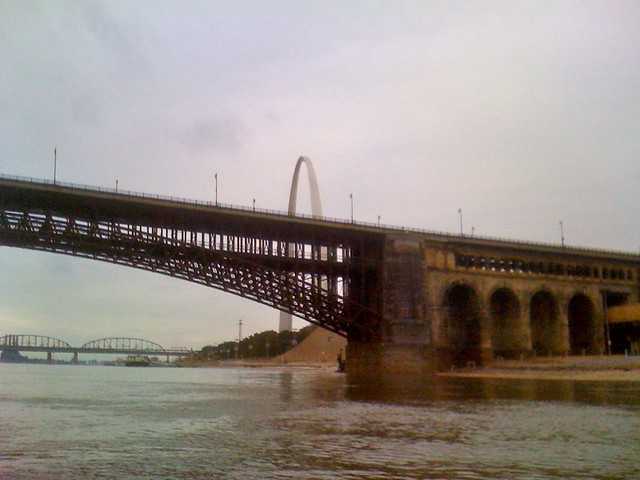 Paddling down to the arch was fun! Instead of four mph, I’m averaging about six, so everything’s just a bit snappier, and you definitely want to plan in advance for where you’re getting out so you don’t overshoot the ramp. I got out right at the base of the arch, right past the Eads Bridge — two engineering marvels of two different centuries are cheek by jowl — and a little boy was putting two turtles (given by a pet shop that can’t sell them anymore) into the river. We had a fine conversation about boats and turtles and rivers, definitely subjects of shared interest between us. 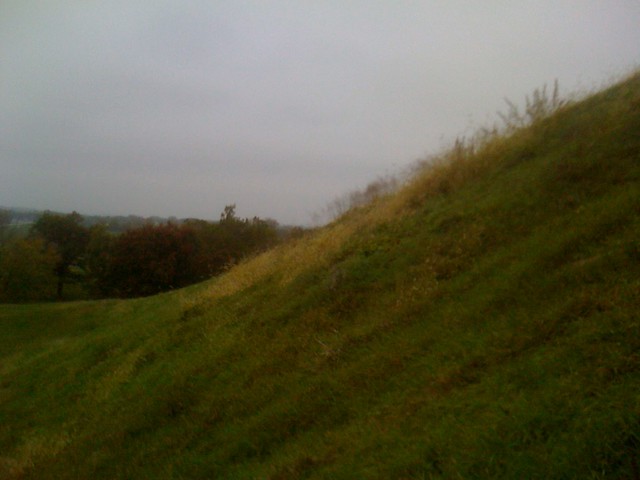 On Tuesday morning, Mary and I got up really early in order to be at Cahokia for the dawn. The cloudy day made the dawn pretty diffuse, so I didn’t experience the solar/astrological significance very viscerally, but it was really wonderful to wander around the mounds listening to the ghosts of the city of 20,000 that flourished here around the first millennium. The structure of the main mound was strangely reminiscent of the Asclepeion of Kos I visited with Despina not long ago, a series of squared-off mounds which create a sense of drama as you climb up to each successive terrace.

The interpretive center at Cahokia is very well-done, and full of school kids on field trips (overheard: “Okay, we’re done with the list of questions, now we can really look around”), which was quite a contrast to the park we had had to ourselves for hours, so we headed back to the arch, where I had planned to get on the bike and head downriver. But when we got there, we discovered that you can actually go up in the arch, something Mary and I had somehow never understood, so we rode these odd and fun 60s-era pods to the top of the arch and down, and we watched the giant-screen movie about Louis and Clark, and explored the really beautifully-done museum (whoever curated the quotations and the historical context: bravo! I expect great pictures and visuals, but I could hardly stop myself from reading every printed word in the whole place…)

By then it was clear I wasn’t going to do a bike ride, so we headed back to my cousins in Clayton, stopping at the wacked out Cathedral of St. Louis, which really is as gaudy a church as I’ve ever seen in America, and I was particularly happy to see Ezekiel in the dome overwhelmed by the heavy hand of God, and the fishes and pelicans in the narthex. In front, there’s a sign designating this cathedral as a Minor Basilica: I thought a cathedral was a cathedral, but apparently there’s a hierarchy there, too; and if you come on particular days, you get a plenary indulgence just for walking in the door. I don’t really know what a plenary indulgence is, exactly, but I think I want one!