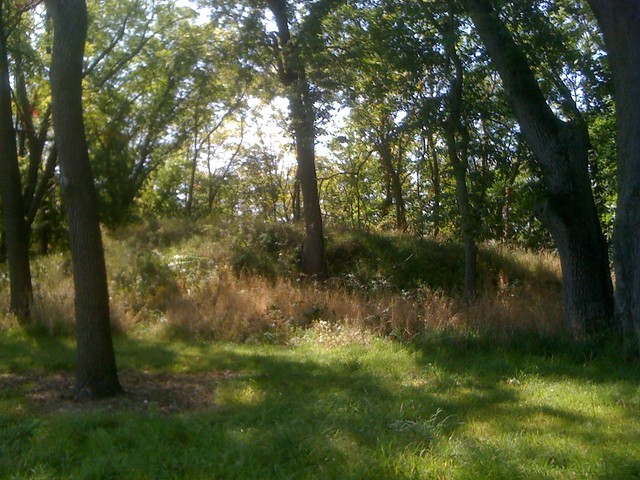 There’s a really great bike path from Savanna all the way down to Rock Island called the Great River Trail, so I decided to do a biking day today to take advantage of it. The last time I biked I was beginning to curse my heavy hybrid and wish I had a road bike, but for today, the hybrid was the perfect choice. A few miles down there’s a gravel trail that loops out into the sloughs and wetlands for a few miles, allowing me to really feel like I was biking right on the river itself. Later the trail goes through a sand prairie for a while, and then up onto a levee for several miles, very cool. Eventually I got to Albany Mounds, which was a center of Hopewellian culture that flourished here from 200 BC to 300 AD, with extensive trade networks that spanned most of North America. I biked around the park on grass trails, completely alone, surrounded by tall grass, mounds, mosquitos, and ghosts. I knew nothing at all about this culture before I began this trip, my friend Lauren Gould emailed me something about it and that was the extent of my awareness, and now I’m finding all these amazing sites tucked away where I would never have found them except by traveling this way.

Anyway, I really got carried away with this bike day, ended up logging something like 60 miles, and towards the end I was passed by two obviously experienced bikers on a tandem. When I arrived at the Port Byron library, Lori had already met Bruce and Becky, and they generously invited us to stay at their house in Port Byron. The two of them have biked all over the lower 48 and Canada and Alaska, how cool is that!?! They are definitely kindred spirits, and it seemed like they totally get this journey of mine. It’s funny, in nearly two months of traveling and meeting people, I have yet to meet anyone who even watches TV, let alone supports the wars in Iraq and Afghanistan or doesn’t want to reform health care in this country. I’m out here in the heartland of America, but I am fully aware that I’m not in fact meeting an authentic cross-section of Americans. Is that because I’m biking and kayaking, so generally meeting people who exercise, which skews against TV watchers? Is it because I’m so obviously a scary artsy-dykey type that only NPR-listening newspaper-reading locavores will even talk to me?! Or is the country so divided that Red Staters and Blue Staters are simply invisible to one another, living parallel but completely separate lives in the same places? I really wonder about this.